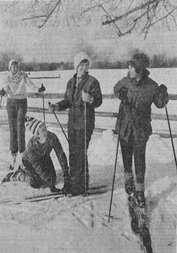 ECOS was founded in the heyday of the modern American environmental movement in the early 1970s. 20 million people had turned out in the first Earth Day celebration in 1970; New York State created the Department of Environmental Conservation in the same year; and many of the major pieces of federal environmental legislation, such as the Clean Air Act (1970) and the National Environmental Protection Act (1970) had also recently passed.

Locally, Schenectady County had celebrated its first Earth Day in 1971, which featured a recycling effort coordinated by Protect and Appreciate our County Environment (PACE), a new program begun by the County Planning Department. In the same year, the Schenectady County Legislature created the Schenectady County Environmental Advisory Council. But aside from those efforts, and those of more traditional conservation organizations such as the Audubon Society and the Nature Conservancy, no local non-governmental group embodied the wide-ranging concerns that drove modern environmentalism.

A group of members from the Junior League of Schenectady sought to address that gap in late 1971. The League, which had a long history of initiating and incubating new nonprofit organizations, held a series of organizational meetings for what became the “Environmental Clearinghouse of Schenectady,” and the group’s programing efforts began in 1972. These included publishing a monthly newsletter, an Earth Week “nature walk”, and an environmental workshop that fall on the Environmental Quality bond issue facing voters that year. The First Reformed Church donated office space on 12 Church Street, in the Stockade, where the group would be housed for years.

By the early 1980s, many of the features that still figure strongly in ECOS’s activities were in place – the first of what would become a series of Natural Area Guides had been published; the excursions that forged connections to the natural world and among ECOS members were off and running; and ECOS’s efforts at environmental consciousness-raising had become an integral part of the network of environmental activism in the Capital Region.

Through the changing political fortunes of environmentalism, through shifts in priorities within the movement, and through the challenges common to any small nonprofit, ECOS has remained a dedicated yet flexible voice for the values espoused by those such as Rachel Carson who originally inspired the group.